Nomads Of The Changthang Plateau

Living in harmony with Nature has been an integral part of Indian culture. This has been abundantly reflected in a variety of traditional practices, religious beliefs, rituals, folklore, arts and crafts, and in the daily lives of the Indian people from times immemorial. India is blessed with some of the world’s most bio-diverse regions. The country’s diverse physical features and climatic conditions have resulted in a variety of ecosystems such as forests, wetlands, grasslands, deserts, coastal and marine ecosystems which harbor and sustain high biodiversity and contribute to human well-being.  Four of 34 globally identified biodiversity hotspots: The Himalayas, the Western Ghats, the North-East, and the Nicobar Islands, which host numerous endemic wildlife species are a part of the country. Owing to the varied eco-zones that the country encompasses, India is characterized with unique richness and diversity of its vegetation and wildlife. Covering mere 2% of the world’s land mass, India is home to 8% of the world’s biodiversity.

The mighty Himalayan Mountain Ranges to the far North host some exclusive wildlife species. Changthang Wildlife Sanctuary in Ladakh is fascinating in a lot of ways. Part of the Hindu Kush Himalaya, the natural enchantress, Changthang Cold Desert Wildlife Sanctuary encompasses two of the world-famous high altitude water lakes, Tsomoriri and Pangong Tso. The altitude of the sanctuary varies from 14000 to 19000 feet, and the topography is formed of deep gorges and vast plateaus. There are around 11 lakes and 10 marshes in the Changthang Cold Desert Sanctuary, and the majestic River Indus dances through the sanctuary, dividing it into two parts. Apart from its location and the spectacular landscape that the Changthang Wildlife Sanctuary is renowned for, it’s also home to an incredible variety of wildlife. Out of the many incredible species that inhabit this unique biome, there is one mammal which is highly elusive, the Tibetan Wolf.

The wolves of the Himalayan and trans-Himalayan systems have been a bone of contention for many biologists as they are interchangeably called Himalayan and Tibetan wolves. They are much larger than their peninsular counterparts and they inhabit the upper reaches of Himalayan ranges in Nepal, and the trans-Himalayan regions of Uttarakhand, Himachal Pradesh, Sikkim, and Jammu & Kashmir. Tibetan Wolves descend to the valleys in winters, migrating with wild and domestic ungulates to the snow-line in summer. The wolves are well-versed with life in these adverse high mountains, and yet, little is understood about these fascinating creatures and the roles they play in their habitat. Going by the accounts narrated by the locals, the wolves of Changthang are the dominant predators in the region, largely due to the rarity of snow leopards in the area. The Tibetan wolf is an amazing hunter with excellent survival skills. It is known to hunt both during the day and at night either alone or in packs. The wolves depend primarily on marmots, hares, and small wild ungulates, though occasional accounts of wolves taking down wild asses have been recorded. The wolves are also known to depend on livestock, mules, and horses domesticated by the Changpas, the semi-nomadic livestock herders from the region. 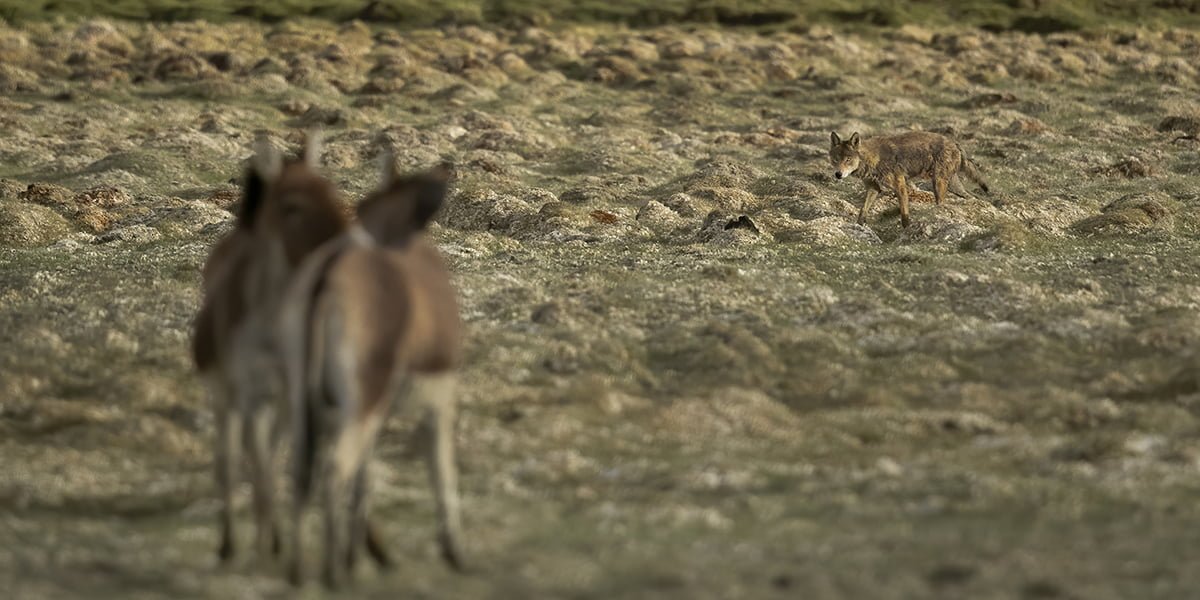 The wolves in the region share an interesting relation with the nomadic tribes and can be found in the proximity of human settlements. It is fascinating to ponder upon how these animals have coexisted with human systems in this challenging yet beautiful landscape, despite the fact that there is little awareness about the importance of their conservation, and appreciation of their roles in the ecosystem. Wolves are pack animals, by considering natural history observations from this landscape; one can get an outline of the wolf pack behavior in this region. A typical pack primarily consists of a dominant male and female along with yearlings and new-born pups. Lone male wolves are known to exist when they are in between packs, or trying to establish their own pack. Seeing these ever elusive creatures in this difficult terrain is quite a task, and photographing the species is something that very few have accomplished.

Livestock predation by Tibetan Wolves in the Trans-Himalayan Region has been well documented. This has resulted in some retaliatory killings by pastoralists across their range in the Trans-Himalayan Region, but there is hope that with the help of constructive conservation measures and awareness drives among the locals regarding the importance of these creatures the situation would change considerably. Harassment of the species by feral dogs, possible interbreeding and competition for food resources is another threat for the species which needs to be addressed on a serious note. Their reduced numbers, loss of habitat-that deprives wolves of sites for proper denning and rendezvous-and the resulting depletion of natural prey pose a major threat to the species. In the high-altitude cold deserts of the Himalayas, if there is one animal that has lived through millennia, existed with locals, cautiously adapted to humans, with every chime of the whispering wind, it is this ancient wolf of India and we sincerely hope that it survives for many more years to come. India is blessed with a diverse geography which is home to amazing wildlife, yet very few of us really care about the natural wealth that our country nurtures. The future of these wild beings directly or indirectly depends upon the choices that we make today, let’s be wise and do our bit to spread a word about the rich wildlife diversity that our country is home to.