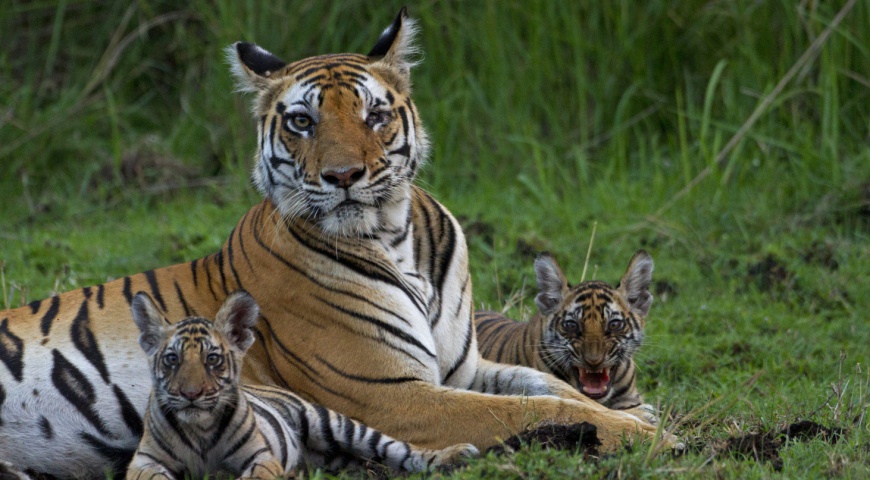 Despite it being nearly two years since her death, “Vijaya” better known as the legendary “Kankatti”; is sincerely missed by one & all who have seen her.

It was just another wildlife tour with a group to Bandhavgarh before the National Park, closed for the monsoon, back in 2014. It was turning out to be a wonderful trip, with Bandhavgarh living up to its fame, with two or more tigers being spotted on each safari.

As I clambered onto the dusty seats of my last safari of the tour, we got a tip-off about Kankatti being spotted in the Chakradhara meadows, accompanied with her nearly 8 month old cubs.

Our driver rushed our gypsy towards Chakradhara, leaving wafts of dust spiraling behind us. As we neared I got disappointed by the crowd of jeeps that had already descended at the edge of the meadows.

All I could see was an indiscernible shape moving in the grass & ‘oohs’ and ‘aahs’ from the mob. Luckily I was being driven by one of the best drivers Bandhavgarh has to offer, “Salim”; who knew the perfect vantage point for spotting the tigress. I was apprehensive about him moving the gypsy, but he assured “Madam ji, aaj Kankatti ko dikhaaye bina hum nai jayenge” (I wont move unless I get you to see Kankatti today). And I trusted him !

A few more anxious moments & lo, behold !
Kankatti walked out of the thick bush, bold strides, oblivious of the crowd; and sat right in front of our gypsy. She was barely 15 feet away from us. All eyes were on her, but she kept looking at the bush.

A little movement in the grass and out came a playful, little cub running towards her. His entry was coupled with not so silent gasps, which made the cub a little conscious of the people around. There were another two cubs in the grass but were reluctant to come out in the open, listening to the excited buzz of the gathered crowd.
After a while & a few cajoling chuffs from their mother, they too summed up the courage & joined in the fray.

All this while i was busy clicking pictures & taking videos; but as I looked again in the viewfinder I was struck.

Kankatti was now looking at me, square in the eye.

I was in a limbo, I kept down the camera & gazed ahead in absolute wonder. I took my time to steady the tingling sensation of looking back into the eye of the tiger. I reached for my binoculars and traced it around the stripes on the bright orange.

The love every mother has for her children, being careful yet teaching them to be fierce, helping them with survival tricks, I had witnessed it in the wild.

The breeze came in, closely followed by a  drizzle & it felt that the Universe had blessed us all with the privilege of being witness to a precious untainted moment; one which we often see & yet disregard. As I wiped a tear from my cheek, I looked at Kankatti with the yearning of a child.

It was time for me to leave but Kankatti stayed put, her cubs prancing around, suckling, troubling her.

And as I lingered with a heavy heart; Kankatti posed, for me one last time, against the backdrop of a flaming sunset & swaying bushes, like the royal bold Queen of Bandhavgarh.