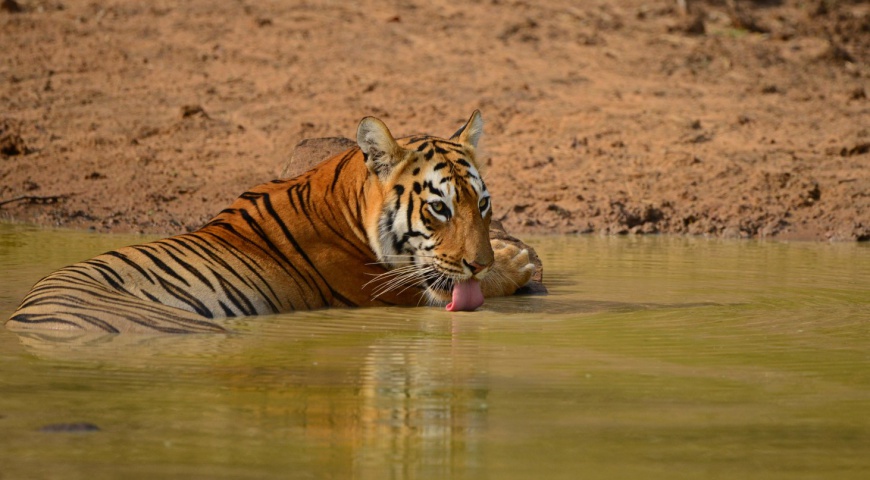 Travel is the only thing you buy that makes you richer.
– Dalai Lama

A grey, drizzly evening all the wildlife enthusiasts met up near the porch of the Pune Station. We board the train heading towards Nagpur; we had set out on our journey to Tadoba Tiger Reserve [TATR]. Seated in tiny huddles were groups of students and adults, until the conversations & fun banter broke loose. Everyone started introducing themselves, sharing their stories from earlier wildlife trips. Everyone was excited to visit Tadoba as the sightings of the regal stripes were at their peak. Listening to the stories my enthusiasm started to rise as this was my first time into wildlife.

We arrived in Nagpur by breakfast time & proceeded via SUVs to Tadoba Tiger Reserve. We clocked Tadoba around mid noon and checked in to the State Tourism Accommodations, it was a beautiful resort with lake view rooms and situated close the boundary of the buffer zone. After lunch, we took some time off to rest our tired bodies. In the evening under the guidance of Mangesh & Aniket (GO WILD Wildlife Instructors) we set out for a nature trail near the resort. We saw a number of different species of birds also the group of Hanuman langurs, playing around amongst them. Our group took a stop near the Tadoba Lake as we spotted a Kingfisher which was repeatedly diving into the water. Our camera constantly whirred till we finally gave up in exhausted due to the hot May breeze.

Finally the moment we were waiting for – safari time.  We were woken up at 4.30, after a little early morning tea we left the resort. Our Gypsies were queued up & we waited for gate to open while the Forest Guards proceeded to check the credentials of the safaris. Gates were thrown open at 6.
As we entered the jungle, Stripey was the only thing in our mind. And to our luck we were greeted by the sight in the first 15 minutes itself, one of the jeeps had spotted the Telia Cubs near Telia Lake. One of the cubs was seated near the road in the long grass. He stood up & started walking. After a while of carefully scanning the grass for any movement, we figured out there was a second cub. After a while we spotted all the four cubs of the famous Tadoba Tigress “Sonam”.
We moved on after watching the cubs to out heart’s content. Our guide showed us pug-marks of a Sloth bear that had walked across the road but we were not that lucky to find it. We were not disappointed as the lack of mammals was made up for by the variety of birds we saw. Our cameras were again put through the ordeal of snapping all poses of birds among the intermittent Spotted Deer, Sambhar, Nilgai, Peacocks, Wild Boar & Indian Gaur.

Facing the Hot and Dry weather and challenging the gusts of dust we started our afternoon safari. And we were rewarded by the sightings of another famous Tadoba Tigress Maya near the water-body 97 & it made my day. Uplifted by spirits on seeing Maya, we spent the rest of our safari time listening intently to our guide, who was telling us the story behind the name “Maya”. 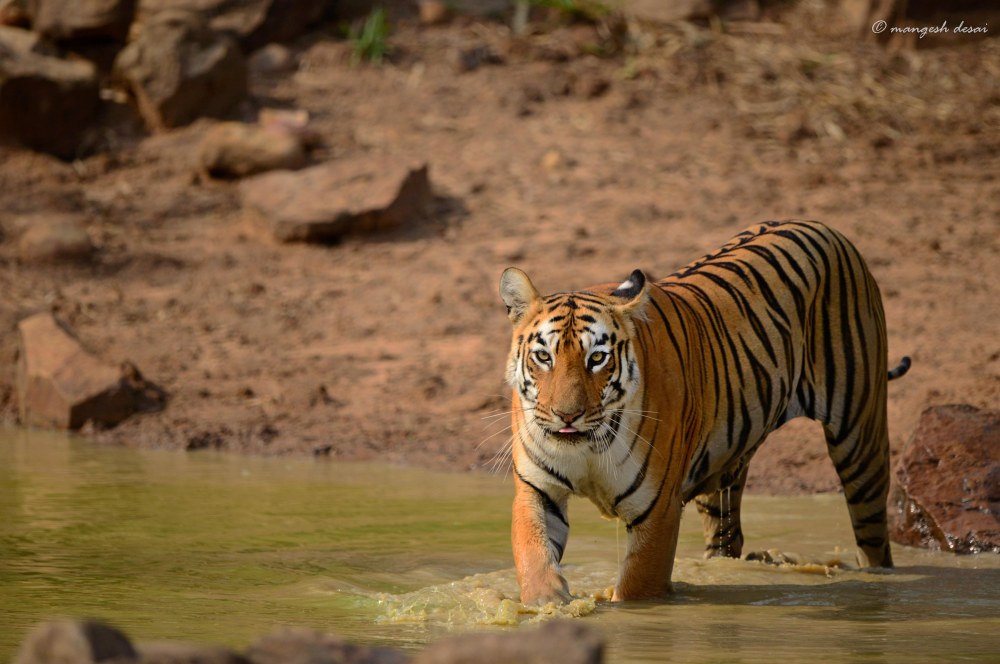 In the start of our third safari, our driver sped up the gypsy as we saw a Sloth Bear crossing the road. Dawn had broken & the Sun was yet to make his presence felt. He crossed the road in a relaxed pace and disappeared in the thick bamboo cover probably in the search of Mahua flowers.
The driver showed us the former Waghdoh (the ex-alpha tiger) area. His driving was amazing & he was so familiar with the terrain & roads and he navigated like an expert. It felt like we were playing a chasing game like Temple Run & it was a lot of fun.

Evening safari & our last safari was very special. The Guide told us there was sighting of Maya and her Cubs (Karan, Arjun & Manka) near the Pandherpauni Lake. As we neared the point all the gypsies were pointing there, cameras locked and ready & people’s looking with full attention towards the lake.
Time passed by painfully slowly, after 5 minutes, but what felt like forever, one of the male cubs of Maya walked out of the grass towards the water & followed back to back by the other two cubs, & then finally the Tigress Maya.
We did not expect to see any action as other tourists from the jungle had seen a Spotted Deer being hunted down by Maya & the cubs. Amazingly so, the dominant male cub (Karan) ran towards the group of Wild Boar sitting near the Pandherpauni lake and the Wild Boars started running wild for their lives. Maya stayed at a distance, suddenly, she crouched & went into a stalking stance. Moments later she sprung forward like a spring released. She covered enormous distances with seemingly no effort & in one swift motion, she had the Boar by the throat.
She did not kill the Boar though, she dragged the struggling animal up to the boundary of the lake where the cubs stood looking at their mother, in anticipation. Maya released the Boar & the cubs pounced on it & we were lucky enough to witness such a spectacle in our first wildlife outing. 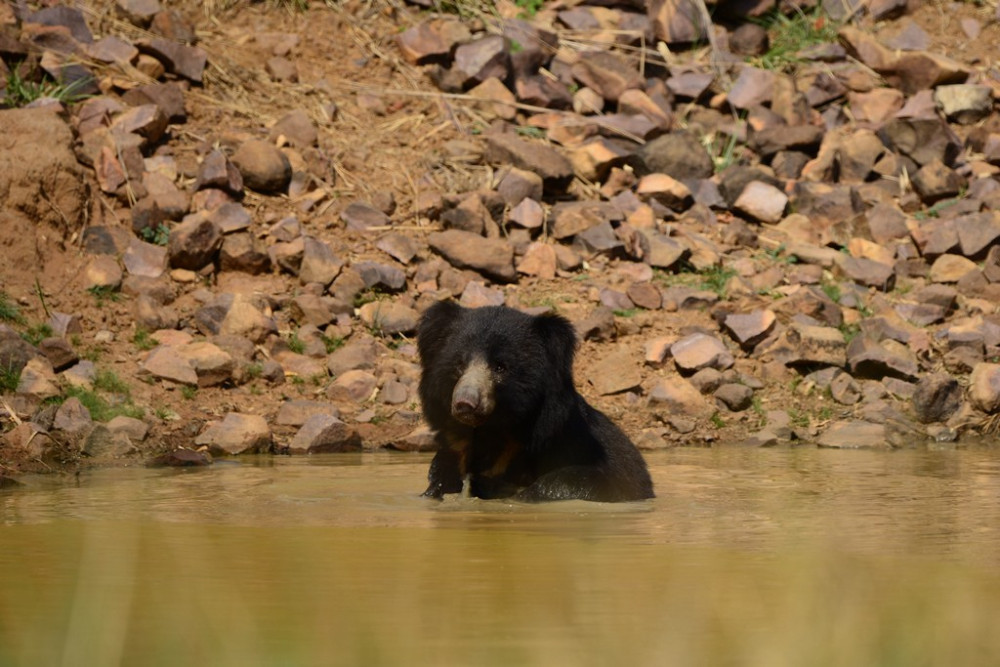 Day Four
Slowly and almost against our wishes we packed our backs, to depart back home. Even in that short time Tadoba made us feel at home, excited and made us appreciate wildlife a little more.

We were thoroughly entertained & educated by the GO WILD Wildlife Instructors (Mangesh & Aniket) who conducted games & educative sessions for us every night post dinner. What amazed me most was their ability to identify & spot birds & even marveled at their knowledge about behaviors of tigers & other animals alike. Overall I am so happy to have such a memorable first wildlife trip !