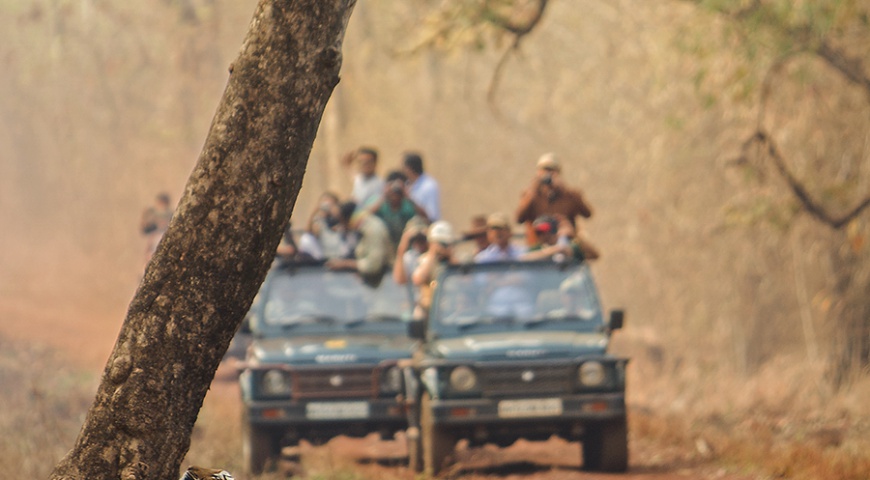 Tadoba : The Summer of Smiles

From the Camp Diaries
Dated 21 April to 24 April : STUDENTS BATCH

Day Zero :
As the train slowly chugged out of the Pune station, the excitement levels escalated rather quickly amongst the children. Most of the campers were avid travellers with a passion for wildlife.

Day One :
After a rather racy drive on the sunny, dusty roads of Nagpur; all of us, dropped into a tired heap of bodies onto the beds at our resort. After a quick lunch we headed out to the meet the dwellers of Tadoba Andhari Tiger Reserve.
The heat was blistering, with wafts of hot, dry wind smacking us in the face. We spotted a lot of birds like the The Mottled Wood Owl, Honey Buzzard (male & female), Orange Laughing Thrush, etc. As we reached the famous Pandherpauni area, we were told that Maya had killed an Indian Gaur, somewhere down the road. On arrival we were greeted by, not only Maya, but also the entourage of her cubs; resting by the lake.

Day Two :
The wind was still dry, but cooler. The air in the jungle seemed thick, thick with the smell of tiger ! And within the first few minutes of entering through the park gate, our driver & guide confidently assured us that they had caught the trail of a male tiger. Tracking him down swiftly, we ran into “Bajrang”. He carried his huge sculpted body with rather ease & charm. He crossed the road from behind our vehicle & then disappeared into the forest.
We hoped to see him again at the parallel road & sped hastily in that direction.We waited for what seemed to be a better part of an hour, until we finally heard some rustling in the dried bushes nearby. But, instead of Bajrang, out came Sonam, accompanied by her cubs. The cubs seemed to be mindless about the various eyes on their every movement, but Sonam was protective & kept an eye on us.
Moments later, even Bajrang decided to show up a little farther down the road & the kids had a serotonin blast.

Day Three :
The scorching heat of the Chandrapur region had driven all the felines deep into the cover of the forest. But we were thrilled to see the variety of birds that we spotted [detailed bird list below]. The students stayed engaged with all peeking expectantly into their respective binoculars to seem feathers in motion. I was kind of relieved to see them being resposible & not bickering over/ getting disheartened over not getting to see the big cat.

Day Four :
The last day of the trip & the sixth safari we headed to the buffer zone of Tadoba. Better than we expected we were graced by the meeting of the monarch himself : “Waghdoh”. Waghdoh, that rugged scarred beast embodies the indomitable spirit of an alpha male. He languished, as he stuttered across to the water hole & then sat in it, panting heavily. It was a long wait to see him but it was worth it.

“Every visit to a forest makes me learn a lesson or two. This time it was the spirit of enjoying a forest even if you don’t spot the tigers. Surprisingly so it was a bunch of kids who gave me this insight. I will always look back this trip with flashbacks of seeing two behemoth male tigers & two distinguished tigresses with their cubs.”