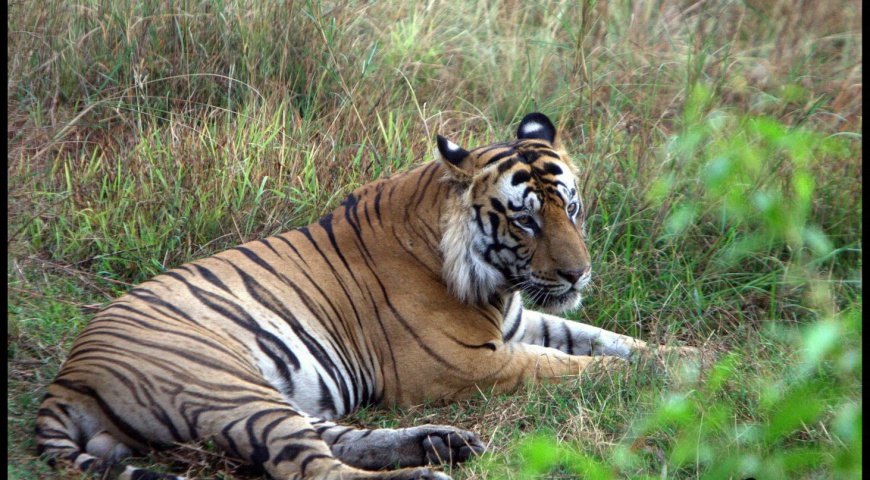 This is my first attempt at blogging & it was the memory I had of him & my first jungle i.e. Bandhavgarh that compelled me to sit at my desk on a rather warm afternoon & share the thoughts running in my mind.

It was the start of what would turn out to be a very dry, hot summer; I had just finished my graduation in engineering & was thinking of turning my interest in wildlife travel into some serious wildlife photography.

I had traveled a bit with my brother Sandeep in the last two years for birding, etc but hadn’t visited any national parks yet. My first ever safari happened to be an evening one at Bandhavgarh. And I didn’t know at that time but I was one of the luckiest people to have such an encounter: I saw an entire tiger family in my first ever safari. It was none other than the Jhurjhura female with Bhagoda, Kankatti & Rajbhera at the Rajbehra Lake. What a sight it was !! 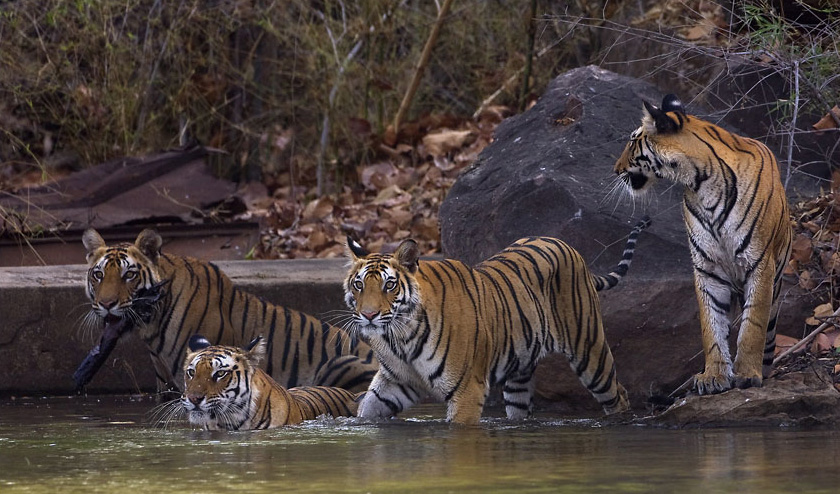 But in the same trip I encountered something that would be etched in my memory forever.& that was when I first ran into Him at Bandhavgarh.
The last monarch of a vast empire, the last promising heir to a legendary bloodline & my first wild tiger.
He was one of his kind, he was “BAMERA“.

Greeted by the dense forest smell of Tala, I crossed the Siddhababa temple, and started on with our search of the striped beast. Our efforts  were rewarded soon enough as we got to know that there was a male tiger relaxing in the far of the grasslands to our left. The driver & the guide remarked that it is most probably the same male who has entered the Tala zone recently & we hear roars and growls between him & another tiger often, at times all night long.

It turned out that although B2 was around, he had been pushed farther into Tala; by a young tiger who then went by the name of “naya male” & B2 understandably was having trouble adjusting to just a piece of his former estate & this led to frequent clashes with this “naya male“.

Bandhavgarh, during this time allowed the practice of “Tiger Show”. If a tiger was spotted at a distance of let’s say 50 mtrs. from the road, tourists had the option to climb on an elephant & see the tiger from up, close. I also wanted to have a closer look at the young hulk who was tough enough to stand up to B2 & so I struggled my way onto the back of the elephant. The tourists were seated on both sides of the elephant, 2-a -side, backs against each other. I happened to be on the right side of the elephant.

By the time we reached where the “naya male” was initially seated, he was nowhere to be found; so we moved on further. Ahead there was a trench in the ground, like a dry nala & the moment the elephant put it’s foot forward; something happened. I guess that the elephant’s trunk brushed against the “naya male” who was lying undetected by the elephant, mahout & all the tourists alike.

As I turned to look towards from where the commotion had erupted, in a split second the “naya male”  sprang up & leaped right in front of the elephant. What a spell-bounding sight it is to see the extreme agility & the ease with which a tiger leaps over considerable distances.

And lo behold, he roared!
It was the first time I had heard a tiger roar, and it sent a shiver down my spine.He was visibly annoyed by our uncomfortably close presence,  he looked at us with anger in his eyes. He paced back and forth, glaring at us square all the while. The gaze was so over-powering that I even forgot that I had my camera in my hands & I wanted to take snapshots of this young male.

My heart raced & as I fearfully watched every little movement of his, he walked ahead a few paces, turned & snarled a few times to make his displeasure known to one and all. It was frightening, even more so since the elephant I was atop, happened to be a sub-adult & short-statured.

The mahout hurriedly proceeded to turn the elephant as the angry male settled down in the bushes at a distance, and we headed back to our respective gypsies. I remembered the video from Kaziranga where the tiger charges & leaps right onto the head of the elephant and attacks the mahout himself; and I shuddered all the more. I couldn’t shake the knot in my stomach, that feeling for the next few days such was the intensity of those few seconds that the “naya male” greeted us.

It was a different era in Bandhavgarh, the jungle was full of tigers who in the future would be turn out to be the legends. I can’t express my joy as a wildlife enthusiast on getting a chance of witnessing the glory of the Bandhavgarh at it’s peak. It is a different peace I get on visiting a jungle & I think it is because of the liking I developed on my first trip itself.

It was the first time I had been part of a tiger show & I regretted it almost instantaneously. I felt it was a truly insensitive practice that continued till the early half of this decade, in which tigers were unduly disturbed, harassed & their privacy invaded & ever since I have never been a part of another tiger show, nor recommended an elephant ride at any point of time, to anyone.

As it turns out, that “naya male” was later discovered to be a cub of B2 & was later on renamed fondly as Bamera. It was an experience which convinced me that it was in the wild that I belonged & that it was time for me to #GOWILDFORLIFE and I have never looked back since.

I know it is hard to understand, but it almost felt like I had lost another loved one, the moment I heard about Bamera’s death in his enclosure. I had wished to see him one last time, even though he was way beyond his prime & looked a pale shadow of himself

Whenever I think of Bandhavgarh, I can almost see him lying in the meadows at Tala against the backdrop of the Bandhavgarh Fort in the distance, the setting Sun reflecting in his eyes; as if he was still there, even if in spirit.