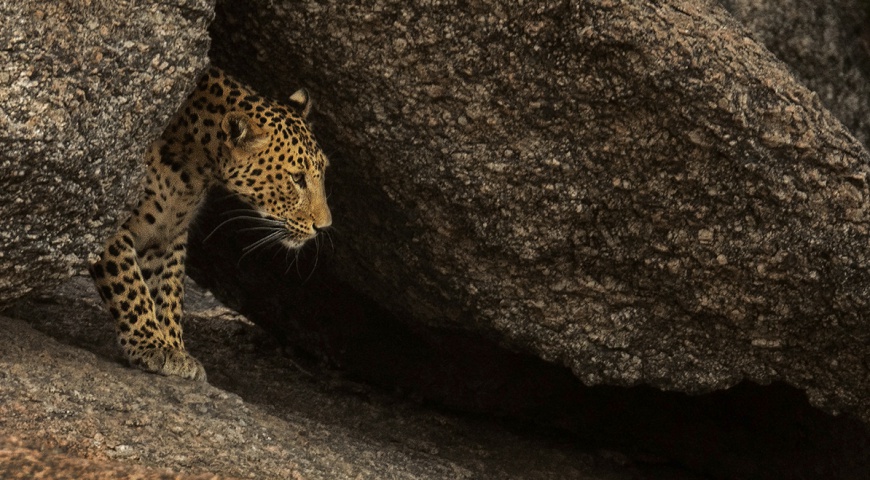 When the leopard God smiles at you, you ask for more.
– Old jungle saying

Having tasted His grace by a rare sighting of a snow leopard pair in the frigid cold of  the Hemis National Park, Ladakh earlier this month; I decided to try my luck again with the leopards of hot dry Bera, Rajasthan.

I embarked on a self driven expedition, joined with a bunch of enthusiastic wildlifers in search of the rosetted beast (Panthera pardus). As luck would have it, we had set the wheels rolling on the day of Holi & the whole drive from Pune to Bera was amazingly smooth , owing to no trucks on the roads. (phew!)

Bera : About a 150 kms north west of Udaipur, near the massive Jawai Bandh (dam) lies a pleasant, albeit dusty, little village with many colorful Rabari men and women. While, nothing seems to be extraordinary about this town apart from the fact that the hills around Bera are alive with leopards!
Nearly each hill has a leopard family- and they are generally visible during mornings when they climb up to rest or in the evenings when they descend looking for a meal. And it’s remarkable that these animals flourish here, (believed to be a total of 40) given the lack of typical wild prey.
But then, the leopard isn’t the most adaptable of cats for nothing.

Leopard’s Lair : An ancient, green establishment run by Thakur Devi Singh Ji,was our choice for stay during our Bera visit. The hospitality of the place overpowered by only the warmth of Devi Singh Ji, himself. Of what I could gather Devi Singh Ji, is hailed as India’s veritable Leopard Man; he is one of the pioneers in establishing animal-human harmony by developing sustainability for the villagers around the wildlife.

Over our stay he continued to spend the evenings with us, showing us video documentation from almost the past two decades about his leopards. Narrating a tale from the yester years, he still comes across as a young passionate man who is truly devoted to the conservation of leopards. He even drove us himself to one of our safaris & proudly exclaimed that Bera is one of the only places where there haven’t been cases of human-animal conflict for as long as he can remember.

Dev-giri : a hillock within the leopard ecosphere; with a Shiva temple situated at the top of the mountain. A tribe of five-six leopards, are known to reside just by the side of the walking trail leading to the temple. The temple is visited daily & inhabited (apart from night & hot noons) by the priest & on Mondays visited by nearly the whole village.

The visiting timings are pretty short but that is overcome by the locals helping in tracking & sighting. The locals spread out with binoculars & on relaying information get tipped, by the local resort owners. The locals thus gain their livelihood & continue living in close quarters with ongoing harmony.

The success of leopard sighting at Bera, is amazing at nearly 90%, with we encountering eight leopards in the first two safaris itself.  The highlight of the trip was at the first safari itself, where we spotted a leopard with her two cubs.

In nearly all the Rajasthani villages, women carry water to their houses in stainless steel pots perched on top of their heads and children in blue and white uniforms ride one speed bicycles through the sandy tracks that weave through the countryside on their way to and from school. Charming, but a pretty common scene in India.
But only in Bera you can spot women carrying water from the well down the road to their modest homes, while a mother leopard is relaxing on a boulder along with her two young cubs, on the hillock beside.

Being from a city like Pune, where news of leopard sightings are associated with terror, where peaceful coexistence seems like an unattainable dream, this experience came as a pleasant surprise and a true eye opener.
It was indeed possible to live in harmony with such animals. All that was required was some effort, which people like Thakur Devi Singh Ji were willing to do.

The other thing I want to bust as an individual is this myth of all the Bera leopards being baited, and sightings happening only when they’re fed. Through our three days, we saw no evidence of leopards being fed. The skeptics remain, but you can only believe what you see and experience.

Disclaimer : All the opinions/ statements here are presented as true to my knowledge & based on information gathered by talking to individuals during the course of the trip.